“Cautiously, I allowed myself to feel good at times . . . the less I needed the better I felt.” Charles Bukowski.

Canada geese gliding down to the water. A glimpse of a little egret.

Swallows and martins, little grebes, reed warblers, black-headed gulls. The river has come to life recently. Perhaps I have too. A few months ago I gave up my day job to concentrate on my creative work. The world of targets and deadlines has gone. A friend said that in the weeks afterwards there would be an out-breath. I think it has just happened, just now, as I arrived here at the river. For a few weeks my life was still dominated by those targets, self-created this time. I had a draft of a book to finish, an edition of prints to publish. I set dates for them that gave me not quite enough time to finish the work properly. I made mistakes, missed my self-imposed deadlines, had to go back and start again. Slowly the work was done, the way it is always done, by itself. The manuscript found its way to a conclusion, the drawings composed the right lines and textures. Words and images arrived. Like the birds.

Curlews calling in the fields. A heron in a rain shower.

I’m now spending most of my time on a fifty foot narrowboat called Masquerade. On the outside she’s a showy thing, shiny paintwork: burgundy, cream and navy blue. There are bright flowers painted on the doors, diamond shapes on the hatches. Her name is proudly displayed in large letters on the sides of the boat. I can’t think of anything less aesthetically suited to someone like me. I’ve tried to be barely visible all my life. But inside Masquerade is all wood panels, curved shelves, dim lights, brass. She has eight windows, and all of them look out onto rippling water, trees that reflect the surface of the river, gliding swans and geese. The people moored next to me say that they see otters here at times, playing between the boats. It’s a tiny home for sensual types. A good place for an artist.

Little grebes, reed buntings, a kingfisher perched on a rope.

Masquerade has a huge bow, a sort of home extension which was added by a previous owner. The front end of the boat was sawn off and a new, longer one welded on. It means that I can fit in a big workbench, which makes it a good studio and study, the perfect place to create. I can sit and write or draw surrounded by water, the rippling light, the songs of waterbirds. I can’t think of a better place to rediscover the flow.

I’m from a place and time where no-one talks about mental health. I’ve rarely mentioned it in my own writing. I’ve focused my words elsewhere up to now and tried not to mention the inner turmoil. But I no longer think it’s the right thing to do, for a writer, a communicator, to veil the experiences which so many share. The other day I looked up the symptoms of a nervous breakdown. It’s a term which doesn’t seem current, but it comes to me a lot. I’m pretty sure I’ve experienced a breakdown in the past few years without it being diagnosed. Insomnia, panic attacks, feelings of worthlessness, fatigue, they’re symptoms I had continually, for a long time. There was no choice but to work through it, though that is, of course, impossible. Only my wife new about it, because I can masquerade with the best of them in public. I think a lot of people are in that situation, on a slow motion descent, hiding it from friends and colleagues, or refusing to recognise what’s happening to them. For many the symptoms of breakdown are part of life, the price of success, even a way to gauge that success. The language of breakdown is everywhere. How many versions of the mantra “feel the pain and do it anyway” are published in every medium? Industries have been built to support it. A culture has been created by it. It’s in every company boardroom, every political organisation. In the west we’ve learned to think like machines and now the machine is inside us. And it breaks down. I’m lucky that I sensed what was going on and didn’t let it progress.

A sandpiper in the boggy meadow. Terns heading north.

So here I am, afloat, an inhabitant of the river, of summer, of skies, of everything moving and not moving. There is a thunderstorm coming in. A minute ago the boat was full of light, ripples moving across the ceiling. Now it is winter dark and the rain is percussive on the steel hull. It’s progressing in pulses, almost stopping momentarily, then hammering. There is a swan beside the boat. I’ve called him Cecil as we’re becoming friends and its right that we’re on first name terms. Though the thunder is getting louder he doesn’t seem to care. He glides into the middle of the river, curls his neck into his wings, lets the flow take him. The rain inscribes a million rings on the surface of the water. Underneath there is the roll of the wake that the swan has made. I’d not noticed it before, that a swan, so serene and seemingly motionless, creates a wake. It took the tribulation of a storm for me to see it. The wake swells and hits the side of the boat, then reflects back into the river, following its maker. It’s how I want to move now. 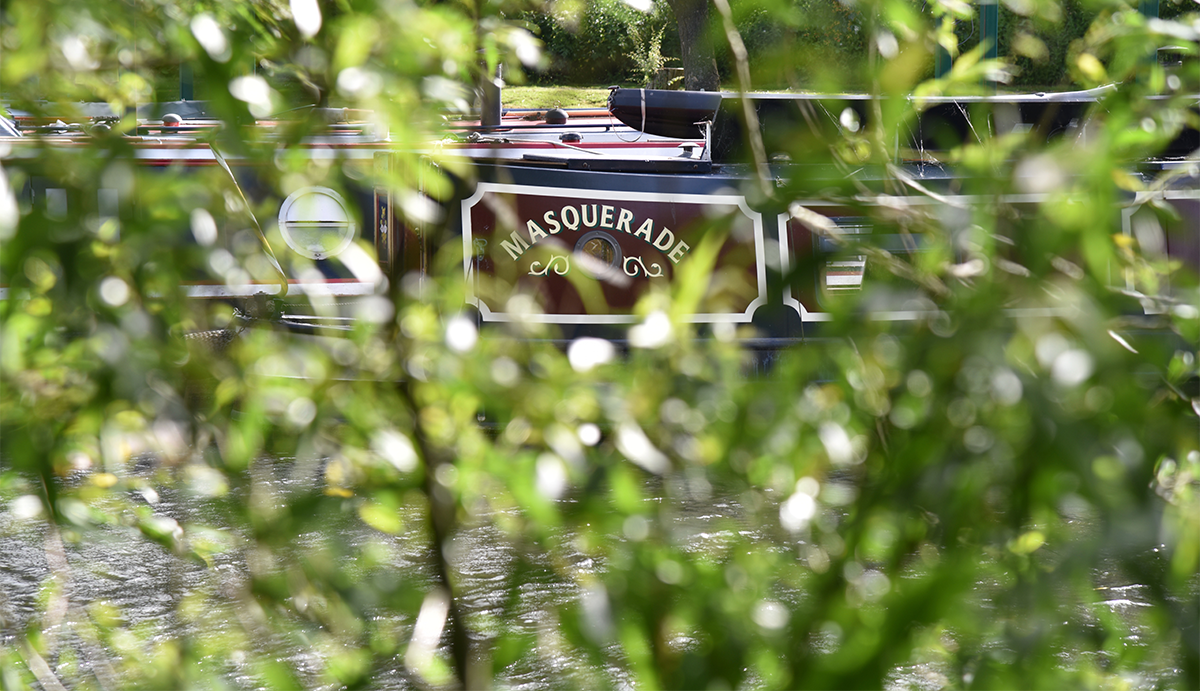 This is the first instalment of a series of posts about coming back to life on the river. Please subscribe to my newsletter for further posts and for news about artworks and publications.

Keep up with the series